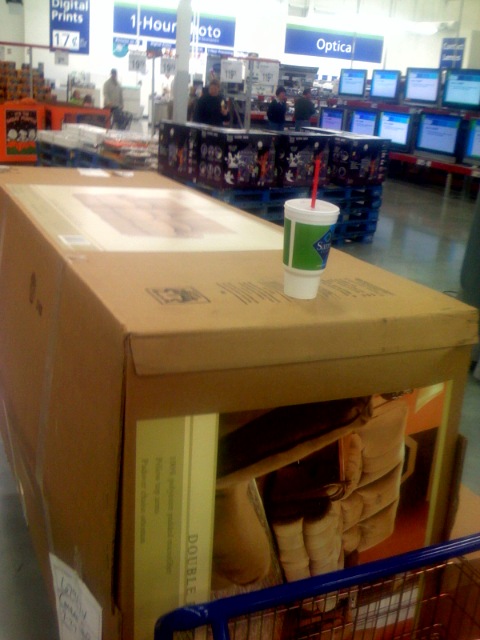 We are redoing our basement and wanted to put one of these really cool sofa’s with a recliner at each end and really fluffy – for the kids to site on while playing video games and even to sleep over – bu reclining the couch back and throwing on a blanket. Teenagers are tough. So we bought a nice Lane reclining sofa from Sams Club for $600 and brought it home.
But this thing was big and bulky and it did not look like it would go down the stairs or through a window. But we bought it anyways and let it sit in the garage for a week measuring things to see if it could go down the stairs or through a window. There seemed to be no solution until my brother Scott came over one evening and I told him this sad story of how we were going to take back the couch because it would not fit down the stairs.
Scott went into the living room where we had a similar couch and flipped it over – and pointed out that the three sections were simply bolted together and held together with two metal bars running across the bottom of the sofa. Eight easy-to-reach bolts and it would be in three pieces.
So we went back to the new couch and tore off the packaging – that probably meant that I could not take it back to Sam’s and get my money back. We flipped over the new Lane sofa and indeed it had the same construction as the Berkline sofa in the living room.
We removed the eight bolts and the three separatre couch pieces went easily down the basement stairs (it was much lighter). In 10 minutes I had it reassembled and up in the basement.
It just goes to show you that sometimes there is a simple solution hiding amongst all the complex solutions.