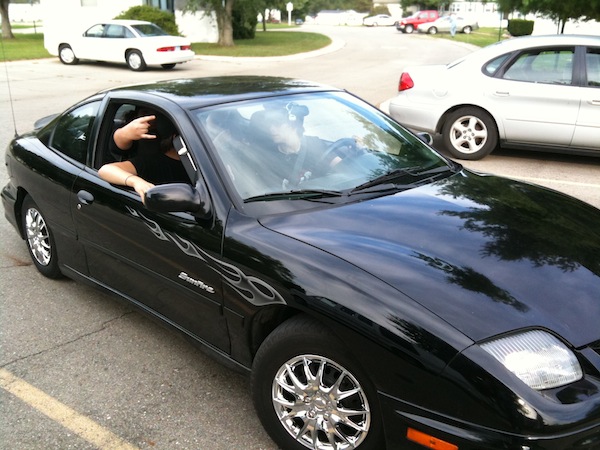 Brent’s 2001 SunFire lasted about two-and-a-half years, doing a fine job as a teenage driver’s first car. It got him through his drivers test, driving to LCC, and absorbed a few small dents and scratches along the way. About a month ago, it developed a rod knock. With 136,000 miles and literally everything on the car falling apart, it was time for another car. I took the car to Shroyer’s Auto Parts and sold it for $300.00.

I spent a long time on Craig’s List, Cars.com, and poring over newspapers and the little used car magazines trying to find something that would fit the bill in the under five thousand dollar range. It was slim pickings – most of the cars have > 150K miles on them and had something wrong in need of fixing.

I just kept skimming all of those brands every day or so on cars.com and test driving a car every day or two to get a sense of that was really in the marketplace. One Sunday, while looking at cars.com online I found a used Subaru Forester at Dunning Subaru in Ann Arbor for about $4500. We had purchased Teresa’s 2006 Subaru B9 Tribeca from Dunning new back in 2006. A Forester would be perfect – lots of visibility, legendary reliability, cute as heck, good cargo space, and as a bonus – full time all – wheel drive for the winters.

I sent in a message Sunday that I was interested in the car via the Dunning web site. A few hours later (still on Sunday) I received a mail message from Elena Manalp, their Internet Sales Manager. At 9AM on Monday, I got an Email from Kristin Malik asking when I wanted to come in. I was on my way in so I said 10AM. I arrived an hour later and the car was pulled up, with the keys in it and a license plate on it, ready for a test drive sitting right in front of the dealership.

I walked right up to the car and looked inside and my heart sank. It was a standard transmission – that explained why such a nice car was in my price range. Brent needs an automatic because of his handicap. As I was bemoaning the situation, Kristin walked up and I told her that I must have missed the fact that it was a manual transmission and so this car was not suitable – but I wondered if I could take a quick test drive to get a sense of how a Forester rode. So we took a quick test drive. It was the perfect car for Brent except for the standard transmission.

When we got back, I did not want to waste any more of Kristin’s time so I thanked her and was about ready to be on my way. As I was about to leave, she asked what my price range would be for a Forester with an automatic. I said that $5K was the top of my range as I did not want to put full coverage on a vehicle driven by a 21-year old. I said that I was pretty familiar with the market by now and knew that was an impossible price for a Forester with an automatic.

So I went back to Craigslist and Cars.com to keep test driving suitable cars in the price range. I had given myself three weeks to replace the car and my time was running out so I was either going to compromise and purchase a car that needed some repairs, or compromise on the body style and get him a Ford Taurus as they were relatively good values but decidedly un-cool, or just pay more money to get him back in a car.

After a week went by and I was about to declare my three week search over and take a compromise, Kristin called and said she had a 2003 Forester with an automatic and 161K miles that she could let me have for $5K – it was a lot less than the price they had listed. My hopes again went up as I came in and saw the little car. It was in great shape, with heated seats, heated mirrors, power everything and cosmetically outstanding. After a quick test drive, I was in love with the car. I had to ask Kristin twice if the price was really $5K including tax, title, and delivery and she said, ‘yes’. I had to pinch myself as I had been prepared to settle for a far less attractive car for about the same price. I put a deposit on the car right away so I could bring Teresa down to see the car the following Monday.

As soon as Teresa saw the car and took a test drive she was sure that we were going to own this little Forester. When we got back, she told Kristin that she loved the car. Kristin had also set up two other Foresters for us to drive because I was surprised at how truck-like the Forester ride was. We had owned an Outback and Tribeca and they drove like luxury cars and so I was a little freaked out by the truck-like stiffer ride of the Forester. Kristin assured me that that was just how the Forester was and let me drive two other Foresters of different years to assure myself that the ride in the little 2003 was completely normal. Kristin was right on. Foresters just drive differently than Outbacks.

When we got back from the third test drive, we went in and sat down with Kristin to tell her we wanted the car. To my surprise, she had already got the paperwork set up and we were ready to sign. I asked her how she knew we were going to buy the car. Kristin laughed and said that once the wife says she likes the car, Kristin knows that the deal is going to happen so it is time to start the paperwork. I asked Kristin one more time if the price was really $5K out the door. Kristin again said ‘yes’ and I pinched myself again to make sure I was not dreaming.

We drove the car home that night and I decided I would drive it for a few days back and forth to Ann Arbor just to make sure there were no problems before we installed the $500 left-foot accelerator for Brent. The car drove great with no problems and no oil leaks so we took the car to Clock Mobility in Lansing to get the left foot accelerator installed. Danny at Clock Mobility in Lansing is great to work with and does outstanding work and does it very quickly. I am sure that he knows that once people bring him a car, they are quite anxious to get it back.

Once it came back from Clock with the left foot accelerator, it was time for Brent to take his first test drive. The seat could be adjusted perfectly and his visibility was amazing and the car’s small size greatly increased his confidence while driving. It was as perfect as I had imagined it would be.

During the test drive at Dunning there was a problem with the rear hatch sticking. Kristin even broke a nail trying to get it open. Without hesitation, Kristin promised that Dunning would fix the latch at no charge regardless of what it would take. First the mechanics manually un-stuck the latch but it quickly re-stuck and so they ordered a needed replacement part and called me a week later when when it was ready and installed it at absolutely no charge to us. 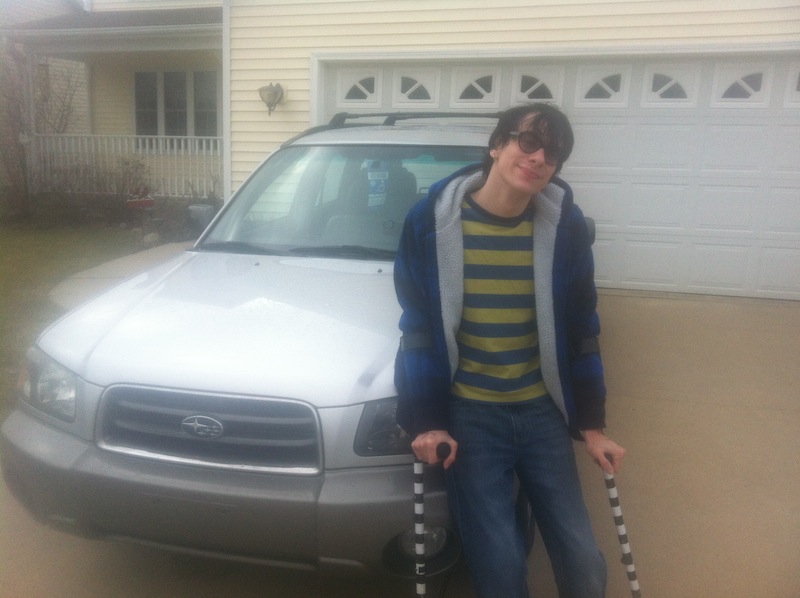 In the weeks since we got the car, Brent has been driving all over the place – he says he can see so much better than in his previous car and is better able to park and navigate. The car is so cute and he can fill up the back hatch with the drum set, guitars, and amplifiers for the band. It is just perfect – it is like a little dream car.

The only thing that still has me a little worried is that Subaru’s are just far too much fun to drive in the snow. So far we have not had any snow – but I am a little worried the first time Brent realizes how agile an all-wheel-drive car can be in the snow. Brent has plenty of experience down sweep-turns and donuts with his ATV so he knows how to whip a vehicle around in a large sandy playground. I have warned him several times that an AWD car can accelerate much better than a normal car in the snow or ice – but its brakes are no better than a normal car – I hope he listens or at least I hope I can take him driving after the first big snowstorm and show him the AWD ropes.

I cannot thank Kristin Malik and Dunning Subaru enough for their outstanding customer service and amazing commitment to help me find the best possible car for Brent that was within my price range. Every time I walk by the car in the garage or watch Brent drive off to school, I pinch myself.