I spent this last weekend in Zurich filming two separate interviews for upcoming issues of IEEE Computer magazine Computing Conversations column with Niklaus Wirth and Bertrand Meyer. It will take a few months before they are edited and appearing in the magazine, but I figured I would share a bit of a sneak preview to whet your appetite.

The day started at 4:30AM when I woke up at my hotel at London Heathrow in order to make a 7:45AM flight to Zurich. I decided that I would dress in a suit and a tie instead of my usual IEEE Computer Society golf shirt. I had a heavy rolling bag packed with tripods and video gear. But the flight went very well and I arrived right on time. It took three trains and about an hour to get to the small town where Dr. Wirth lives since we had agreed to do the filming at his home.

We had agreed to meet mid-afternoon in case I had a problem with travel or an unanticipated travel delay. But my travel went perfectly and I arrived about 2 hours early. I hoped to find a little pub or coffee shop to sit and work on my laptop waiting until the right time to go to his house, but the town was so small that there was no where to wait. So I started hiking to Dr. Wirth’s house. The sun was bright and the recent snow was melting and running down the roads and the birds were signing – it was a wonderful feeling. It was about a 1/2 mile hike up and down hills and part of the hike was on a dirt path. I must have looked quite silly in a suit, tie, and dress shoes and backpack and carefully lifting my bulky rolling bag as I walked down a dirt path in rural Switzerland. 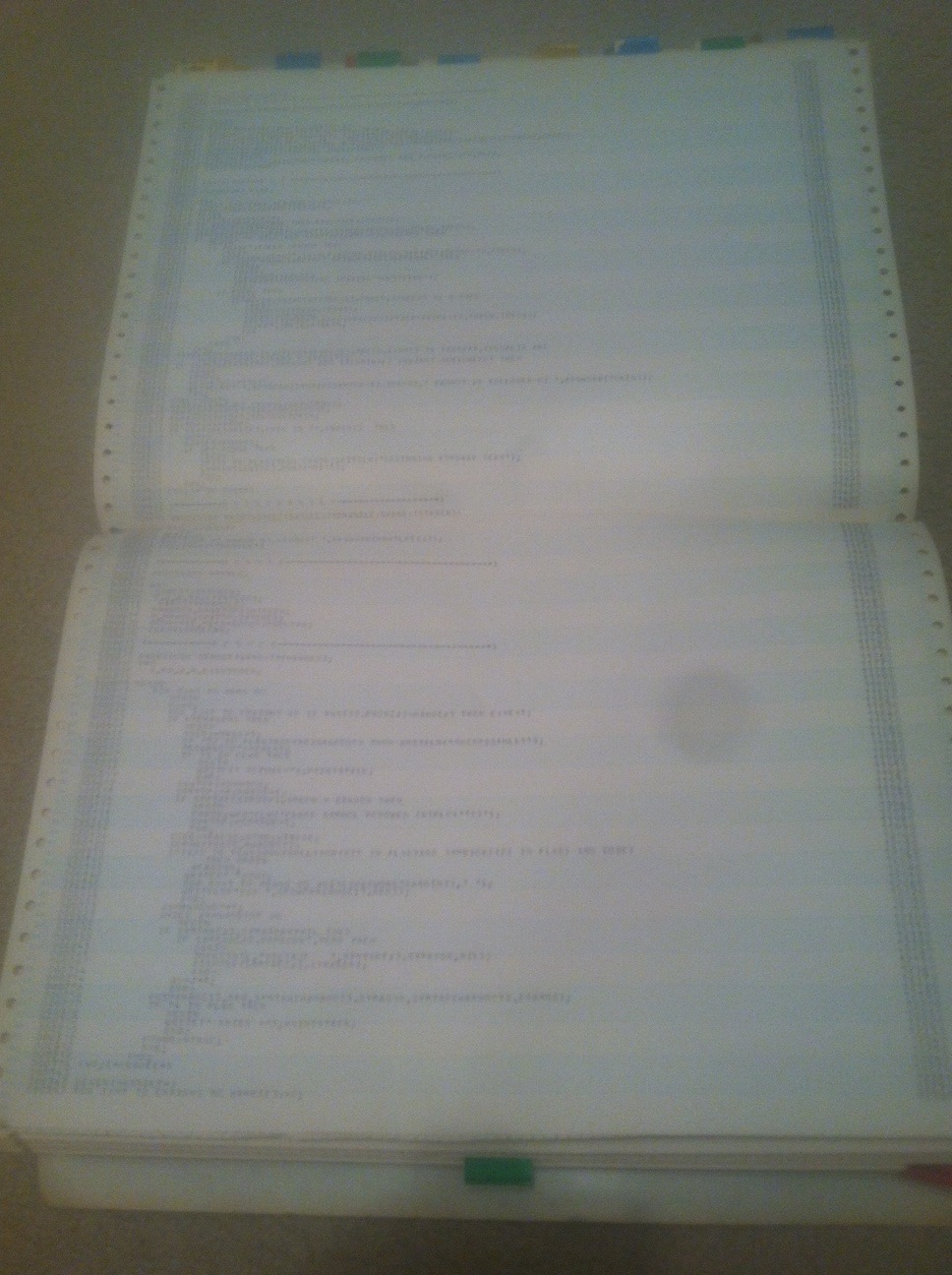 When I arrived at his house (2 hours early), he had just finished preparing his lunch. He was surprised to see me so early but warmly invited me in and I had a cup of coffee while he had his lunch. We had a great conversation over lunch, and I showed him the books I had brought as well as my line-printer listing of my own compiler project written in Pascal back in 1980 when I was an undergraduate.

After lunch, I started setting up the lights and video equipment in his living room. Part-way through, he suggested that perhaps we could film in his basement workshop. When he took me down to the workshop, it was clearly the perfect place to film him. His workshop was filled with computing equipment, hardware, software, woodworking tools, and radio controlled helicopters. It was the perfect set.

I was able to use his workshop lights along with my own lights to get a really nice setup for the interview. I even had a backlight. 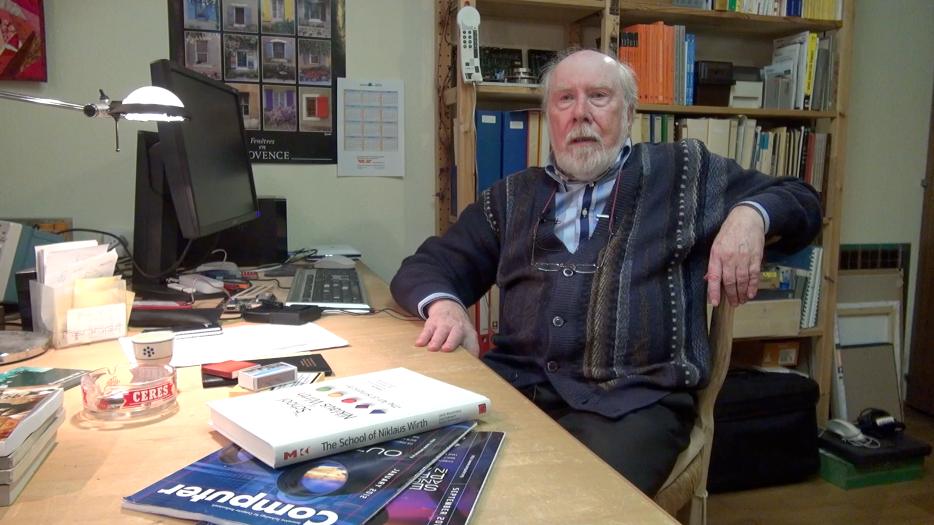 The interview went wonderfully. Of course we talked about Pascal and its success. But we also talked about how he was uninterested in commercializing his creations, instead always taking the next step in producing new approaches to teaching Computer Science. The Modula language, Lilith computer, Oberon language and operating system, and Ceres computers were simply the evolution of what he saw as improving how we taught computer science. He left any commercial potential for his creations to others. In essence it was Open Source long before the term was coined.

Dr. Wirth has been retired for over ten years. He thinks of being retired as an even better form of tenure. He continues to work and innovate in his own directions and at his own pace and with no need to attend faculty meetings. He is currently working on building a teaching environment that combines his Oberon object-oriented operating system and language with a microprocessor he designed for the Xilinx Field-Programmable Gate Array (FPGA). When he completes this work and accompanying book, it will provide an environment where students can explore a complete working computer from the hardware logic gates through the operating systems and on up to end-user applications written in Oberon. He is concerned that as our consumer electronics hardware becomes increasingly integrated and sophisticated, students lose the ability to understand the low-level elements that make up our personal computing environment. He wants to provide an integrated working environment that is simple enough to be completely understandable and as such worthy of close study.

If you look closely at the above photo, you will see a plane of Extended-Core-Storage (ECS) from a CDC 6000 Supercomputer from the 1970’s hidden in the picture :). Unintentional historical product placement as it were.

After the interview, I went back to Zurich to prepare for dinner.

Dinner with Bertrand, Annie, and Niklaus

My second interview was with Bertrand Meyer the next morning (Saturday). Of course Bertrand is one of the early innovators and communicators as computer Science transitioned to Object Oriented Programming, given endless talks, written many books and articles on the topic, and developed the Eiffiel programming language, and has taught the introductory computing course using Effiel at ETH for the past seven years.

On Friday night Bertrand and his wife Annie had invited Niklaus and I to dinner at their apartment in Zurich. This time I figured out my transportation precisely (Zurich bus #33) and arrived with a few minutes to spare and walked up to the Meyers’ apartment right on time. Niklaus arrived a bit later as he had driven and had to find parking. Dinner was lovely and the conversation was wonderful. We well into the night with our dinner and some wine and talked of politics, the economy, technology, emerging computer science in Russia, teaching philosophy, and much more. Annie is the CEO of the their corporation www.eiffel.com that now creates the compilers and development environment for the Effiel language. The company is headquartered in Santa Barbara and Annie flies back and forth between Zurich and Santa Barbara to manage the company.

The dinner and conversation went late into the evening and as I went back to my hotel, I realized that the interview the next day needed to be about both Bertram and Annie Meyer. Theirs is an amazing lifelong personal and professional collaboration has produced five children, several grandchildren, many books and seminars, and a vibrant company.

I filmed the interviews with Bertrand and Annie Meyer in Bertrand’s office on the top floor of the Computer Science Building at ETH. Bertrand talked about the emergence of Object Oriented thinking in the early 1980s and how he promoted the idea writing books, papers and doing seminars to a worldwide Computer Science community that just could not get enough of the new approach. 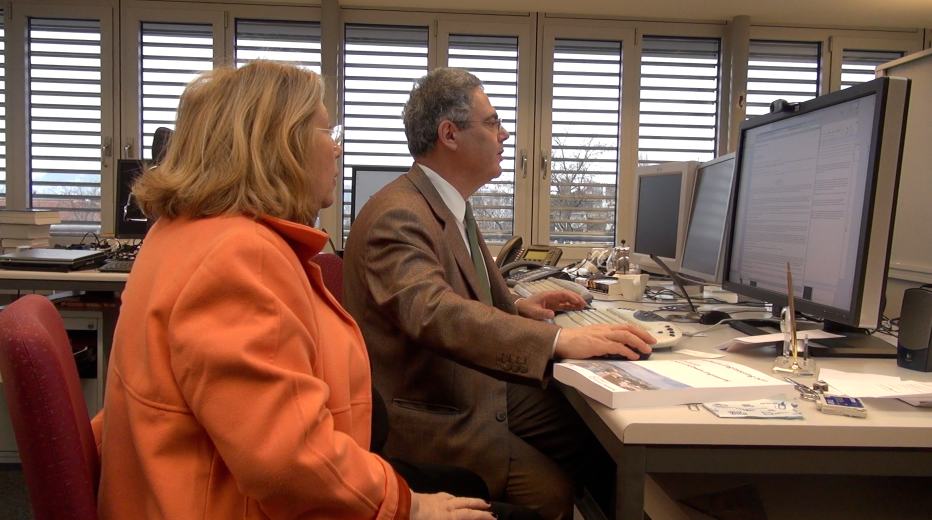 Bertrand’s next area was Software Engineering and Formal Methods. He was one of the co-authors of early ZED work. But even as great research work was being done in the theoretical underpinnings of Formal Methods, Bertrand was concerned that the ideas were too complex to have a practical impact and too complex to be understood by beginning computer scientists.

The Eifffel language was intended to make Software Engineering more approachable by developing a system and language to capture things like pre-conditions and post-condition in their most natural way.

Annie Meyer started helping Bertrand manage his seminars during the 1980’s while their children were growing up by taking on small roles in the company. Over time as their children grew up and their company grew, Annie learned all the sales, marketing, accounting, technical, and other skills to become the CEO of the www.eiffel.com.

I am really looking forward to building a story around a couple with such a deep, long term, and multi-faceted collaboration.

I was on a plane coming back from Zurich and watched the new remake of the Aurthur movie.

I loved the movie. It is hard to remake a movie that is so beloved and succeed – but this movie worked for me. It was a wise combination of the familiar and the new in a way that will please the viewer regardless of whether they saw the original or not.

Helen Mirren as Hobson was a brilliant idea. I thought that updating the show to include scenes from Alcoholics Anonymous helped the plot nicely and provided a better explanation for the plot resolution. I though the plot result ion at the end was more “responsible” and logical in the remake. All the characters were a delight and were the perfect combination of capturing the essence of the characters in the original and yet making the characters all their own.

I kept wondering if my favourite line, “Perry you are a dead man!” would show up. I was initially disappointed when that little sub-plot was done differently, but then realized that one thing that a sequel needs to do is not try to replicate already perfect scenes that that cannot improve on – so they gently wound the plot right by that line.

The ending was more detailed and and so it felt like I was watching it for the first time. Of course there was a moderate need for tissues after the movie completed.