If you owned a 2006 or 2007 Subaru B9 Tribeca, you would know why this post is important. The first year the Tribeca was introduced it had really cool headlights with flowing alien-bugeye styling. Later models have more conventional headlight design and are probably easier to replace. The 2006 Tribeca headlights (particularly the low beams) are a bit of a trick. Particularly the driver side.

Most of what you need to know is in this awesome entry in the FixYa.com forum:

FixYa.com: How do I replace headlight on 2006 subaru tribeca 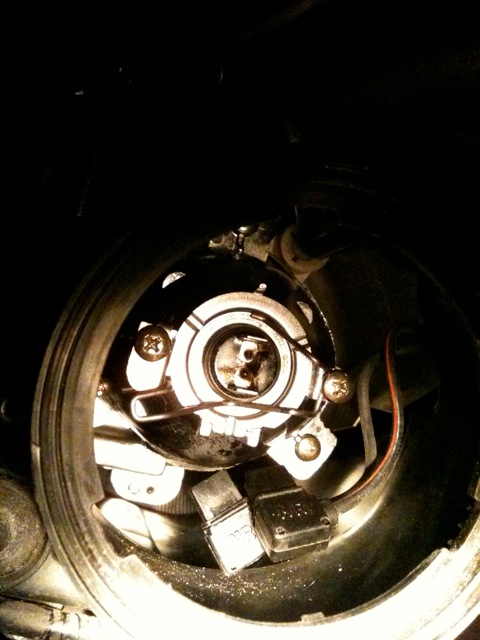 The only thing that is a little vague is how to get the dang clip off and back on. The rest is pretty easy once you can get to the back of the light.

Note: See those Phillips screws – do NOT remove them. I know that our first instinct is to unscrew things – the screws hold the clip in place and are a bear to get back in. Just do NOT under any circumstances remove the Phillips screws you see in these pictures.

First, getting the clip off… Here is a picture of the passenger side bulb facing forward (the left side of the picture is toward the center of the car).. You can see that the leads have been removed from the bulb and tucked down and away.

On the left side of the picture you see the D-shaped left end of the clip. You can just see the end of the clip peeking out from under the bit of metal that is held in place by the left Phillips screw. To remove the clip, push the D-shaped bit toward the front of the car and then down toward the garage floor. It will easily unclip and then pull away easily so you can remove the light. 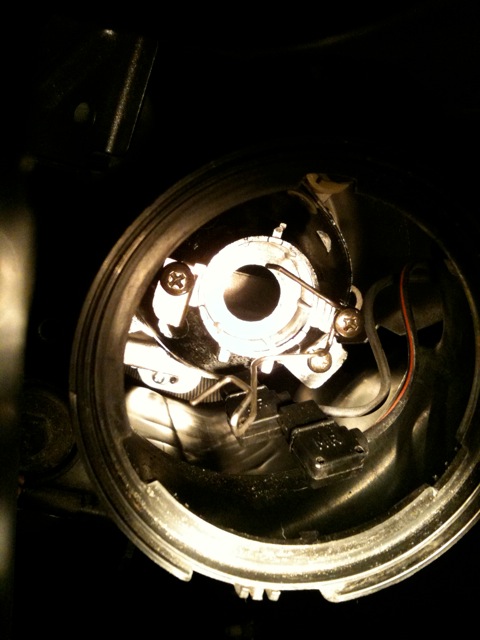 With the clip off and the light bulb removed, we see the detail of how the D-Shaped part of the clip is actually kind of an S-shape with the little bit that clips under the metal by the left Phillips screw.

We also see that the little alignment tab on the bulb faces downward. The replacement bulb is a Sylvania H7.

To reinstall, put the bulb in with the tab downward, get the clip so it rests on the flat bulb base, push the D-shaped bit of the clip slightly downward and toward the front of the car than let it come back toward you and and the clip will grab under the metal bit by the left Phillips screw and end up looking like the “before disassembly” picture.

Put the leads back on and reassemble the rest and Voila! You have a new low-beam on your 2009 Subaru Tribeca. And you saved $50.00 and several hours of frustration.

P.S. If you followed these instructions so far, imagine for a minute just what a pain it would have been if you took out those Phillips screws.

One more fun bit of information. This design is pretty hard to see. If you have a mirror, you can and should use it to get the lay of the land and figure our how things go together. But I did not have a mirror. All I had was my trusty iPhone. I stuffed a flashlight in to get some light and then put my iPhone in to take pictures that I could not see myself because the space was too small. So the only way I got to see these scenes was through my iPhone acting as a makeshift periscope! Yes – there is an app for that.

FixYa.com: How do I replace headlight on 2006 subaru tribeca

Again, I need to give props the the folks on the FixYa.com forum – they tell you all the hard stuff – especially how to get at the light on the driver’s side. All I added here was the detail and photos regarding working with the clip.