Since the University of Wisconsin was in the Rose Bowl and my father Russ Severance is a Wisconsin alumni, I decided to take my dad to the Rose Bowl. This is a report of that trip.

We got up at 5AM on December 30, to go to the Detroit Airport to Fly to Los Angeles. We flew first class thanks to Delta frequent flier miles and had a nice breakfast. I was writing my book about the history of Sakai and so I spent much of the flight writing furiously (it is up to 139 pages now) while he read an early review copy. Since he is my dad, he found it fascinating – that is not an indication that any else would like the book – but at least he did. 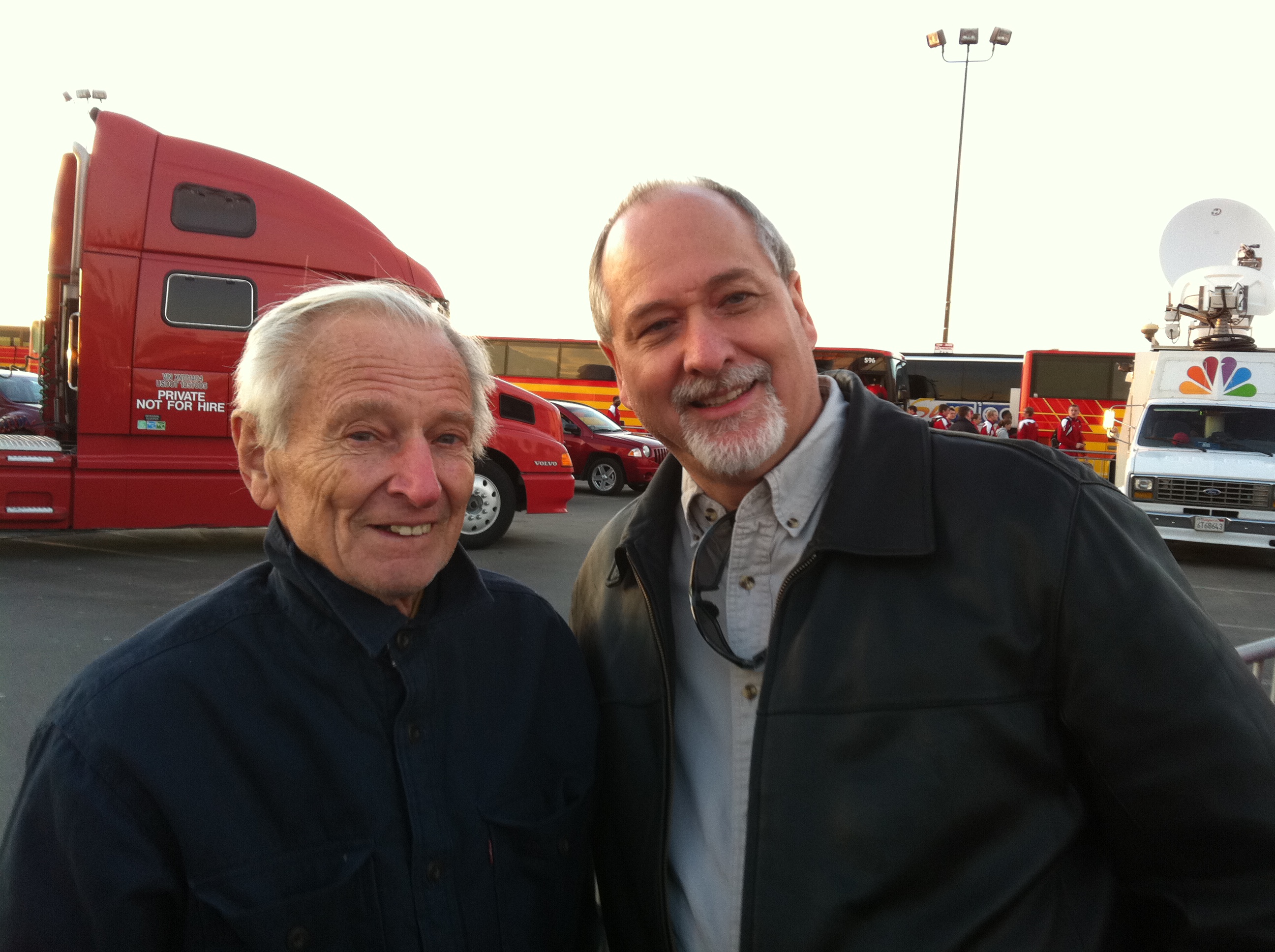 When we got off the plane, we went to Venice Beach and then on to Santa Monica to attend the Wisconsin Pep Rally at the pier. The pep rally was a lot of fun and lasted a long time. The Wisconsin marching band leader is a complete riot – very funny.

On December 31, we first went to Hollywood to get the standard picture with the sign in the background. Apparently all the people on the Wisconsin guided tours came a the exact same time so it was completely packed and everyone was wearing red clothing. We saw the walk of fame and the hand prints in front of the Grumman Chinese Theater. But it was so crowded that we decided to move on.

Our next stop was the La Brea tar pits where we walked the grounds and spent a lot of time in the museum. I really like the La Brea museum because the history is more recent and it feels more connected to the present than most natural history museums that are 60 million years old. The tar pits are really simple, clear and obvious and leave very little room for misinterpretation. 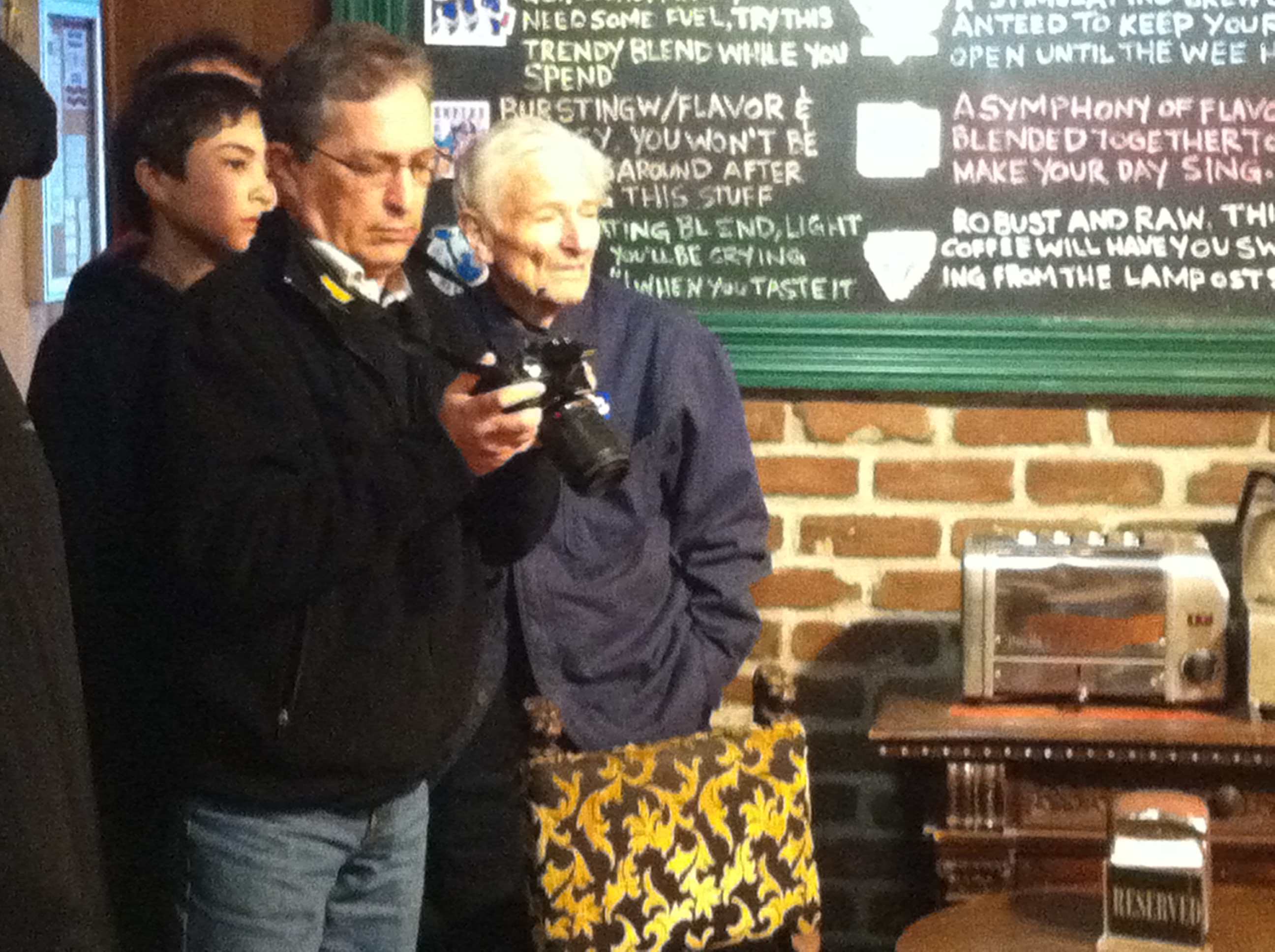 After the La Brea tar pits, we went to the Warner Brothers Studio VIP tour and got a tour of their back lot. This was the first time I had ever been on a studio tour other than Universal. It was great – we were on a cart driving around and our tour guide was funny and informative. We saw the movie sets for Chuck, Ellen, and Two-and-Half Men. We also went through the prop department and saw the Cheers set including the famous orange couch.

January 1, 2011 was game day. I wanted to go very very early and we did not run into much traffic at all so we ended up with four spare hours. We walked around and bought Russ a nice red hooded Wisconsin sweatshirt and I bought a T-SHirt so we would be red-colored like everyone else. Russ really liked the hooded sweatshirt. It was surprisingly cold while we were there. This night before the Rose Bowl it got down to 39 degrees. We decided to walk from the Rose Bowl up into Pasadena to visit Whole Foods. It was about a 2.5 mile trip but we had plenty of time.

As we walked up the hill to Pasadena, we encountered a wave of people leaving the Rose Parade that had just finished. Russ had been curious about the Rose Parade – but we did not have tickets. But through the luck of timing, we walked onto the parade route about 45 minutes after the parade so he could see all the bleachers. He did not believe me when I had told him they sold 90 dollar tickets to the parade. But he believed as we walked down the parade route. We got to Whole Foods, had lunch, and then walked back down the Rose bowl.

We dropped our stuff off at the car and went back into the stadium right on time. But the lines to get into the tunnel are pretty insane and the ushers for the Rose Bowl are pretty poor at crowd control. We stood for 25 minutes barely moving but finally made it in with about 15 minutes to spare. Many people I am sure did not see the kickoff because of the poor crowd management. Note to self – arrive very early to avoid the stadium tunnel rush.

But we did see the kickoff. The game was great. The teams were well matched. My summary is that there were two great offenses, one great defense, and one very good defense. The most important difference was that Wisconsin could only put single coverage on the wide receivers and never got any pressure on the TCU quarterback – that is a recipe for failure. And TCU defense was quick enough to play a tight zone that kept the Wisconsin passing game sputtering.

The game was fun until the end and TCU won – but a good time was had by all. We did not stay for the ‘Fifth Quarter’ – I don’t know what it was and Russ and I were both cold and tired and wanted to get back to the hotel. We left northward and the traffic was very light and we got out quickly. Perhaps because all the Wisconsin fans were still at the Fifth Quarter. 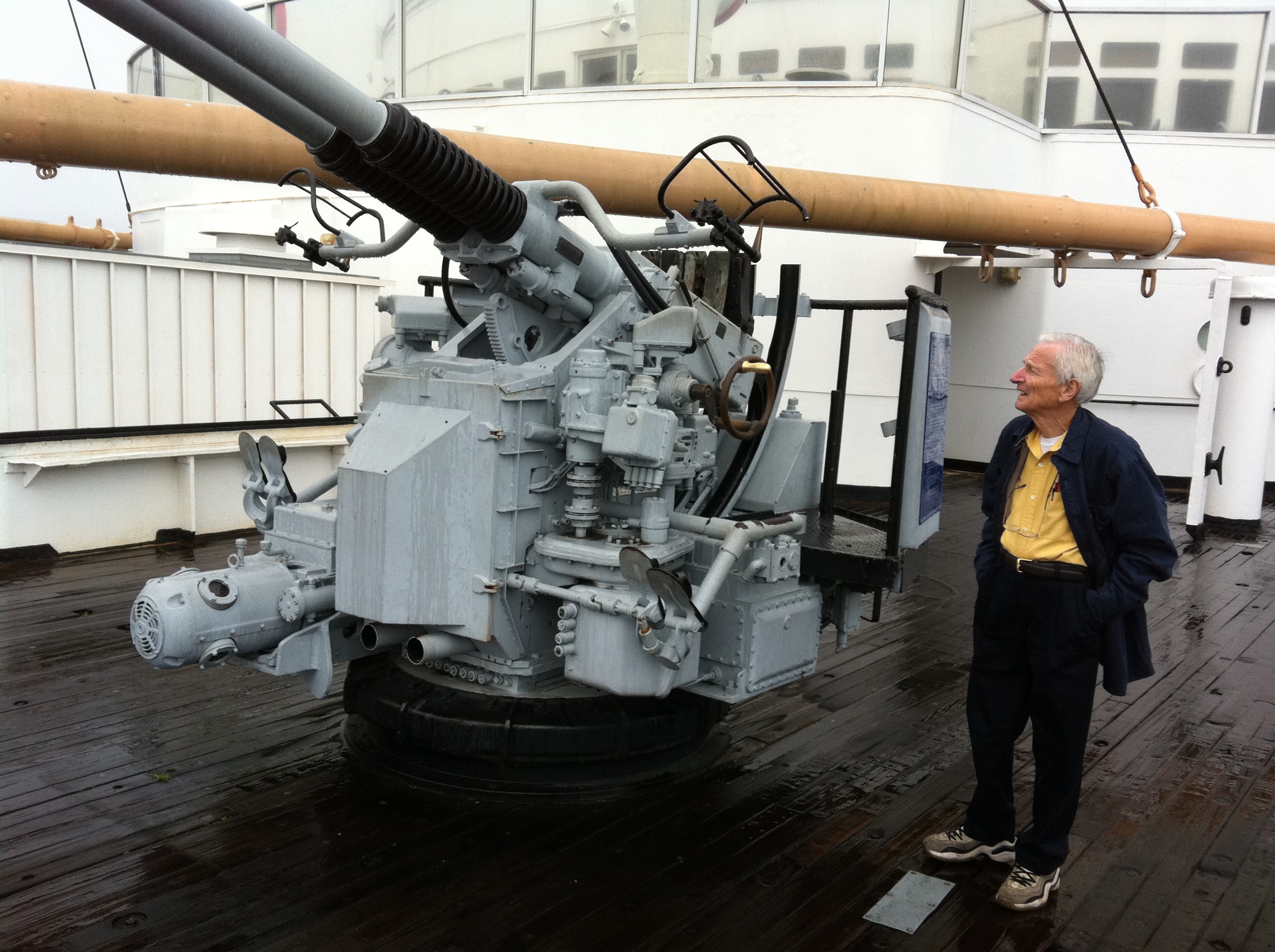 The next day was out last day and we went to the Queen Mary. We toured the Russian Submarine and went on an excellent guided tour of the Queen Mary that focused on her World War II role. The tour guide was amazing – he brought everything very much to life. On the tour, Russ got to go into a lot of rooms that we could not go into on the self guided tour. We also went on the spooky tour of the bowels of the ship. That seemed pretty lame – I would have rather just had the exact same tour with the lights on. It was a very cool tour – but with the lights off you could not see the amazing engineering of the guts of the ship.

As a last stop on the way to the airport, we stopped at Fryes so dad could see a store that has oscilliscopes in stock and on the shelf. That was cool and afterwards we went to the airport to check in and have dinner.

We had dinner at the Encounter restaurant overlooking the LAX airport and then we took off for home.