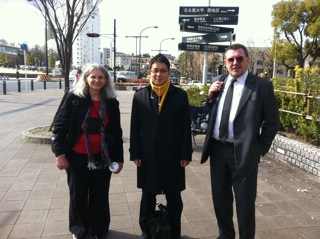 I was very honored to be invited to speak at this year’s Ja-Sakai meeting in Osaka, Japan at Kansai University along with Ian Dolphin of the Sakai Foundation and Janice Smith of Three Canoes. My topic was IMS Learning Tools Interoperability, but I broadened it to think about how open standards and open source combine to lead toward flexibility and freedom for teachers and learners to use the best possible technologies and combine and compose those technologies as the teachers and students see fit rather than waiting for vendors or IT staff to make new approaches possible.

My talk was titled IMS Learning Tools Interoperability: Free as in Freedom. 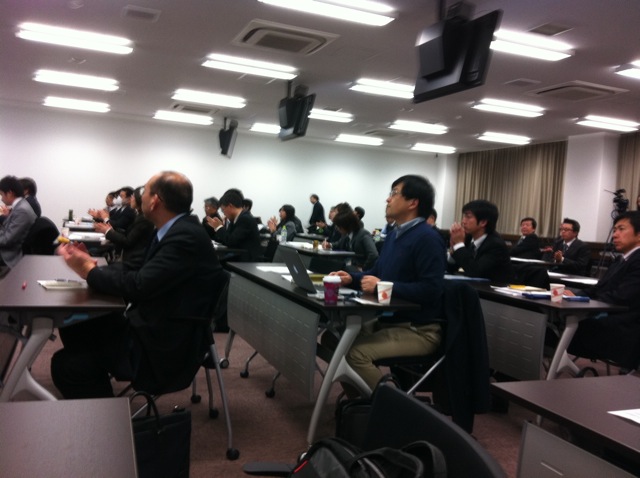 The trip started in Nagoya where we had a day-long on-campus workshop about Sakai hosted by Shoji Kajita. Shoji is very active in both the Sakai and uPortal communities.

There were a lot of good IMS Basic LTI questions. One key observation is that Basic LTI really reduces the barrier to entry for building a tool to plug into Sakai.

After two days in Nagoya, we took the Shinkansen to Osaka for the JA-Sakai meeting on Thursday. At the meeting, I was also able to catch up with Kazou Yana from Hosei University. We interrupted the program to hold a moment of silence at 2:46 PM local time to commemorate the exact moment of the terrible earthquake seven days earlier.

In my travels I there was no evidence of any problems in the parts Nagoya or Osaka. They are abut 450 miles away from Sendai so it is quite a distance. When I came through Tokyo Airport en-route to Nagoya three days after the quake, everything was cleaned up and operating properly. In Nagoya and Osaka everything was completely normal and there was absolutely no evidence of any problems, damage, or shortages. The trains, stores, streets and parks were full of people going about their normal everyday activities.

I am sure that in the Northeast where the quake was most intense and the tsunami happened and the nuclear problems occurred, there will continue to be cause for concern, but outside the immediate area of the problems, as best we could see Japan was unaffected. So that is some good news.

In the evening we had Karaoke planned – but most folks were somewhat tired so we ended up with three people each night: Shoji Kajita of Nagoya University, Janice Smith of Three Canoes and me. Janice never done Karaoke before – but she was a total natural and could sing lots of songs. Once she got started she never passed on her turn.

We did 2.5 hours in Nagoya one night and three hours in Osaka another night.

Everyone sang a lot of cool songs – with just the three of us, we even tried things outside out comfort zone. We all had a broad range of tastes – Janice sang a lot of classic rock and Shoji seemed to specialize in singing 80’s pop like Cyndi Lauper as well as Japanese standards – which he was very good at.

With a total of five hours beteen two nights, I got to try a bunch of things. This was my partial song list from the second night to give you a feel:

I did everything petty well but gave up on the Brittany Spears song half way through. I was just trying to do a female pop artist since Shoji was having so much fun with Cyndi Lauper. But alas, I only knew the chorus and so I completely flopped the song and had to get out early.

All in all, a great time. The JA-Sakai sessions were recorded and I look forward to seeing the sessions again online.

Again, I owe many thanks to my wonderful hosts for taking such good care of use while we were in Japan.