If you follow my twitter, you can see I am writing a book (currently at 172 pages). I am sitting at Boston Logan airport and finished a fun section about Beth Kirschner so I figured I would put it up as a blog post. 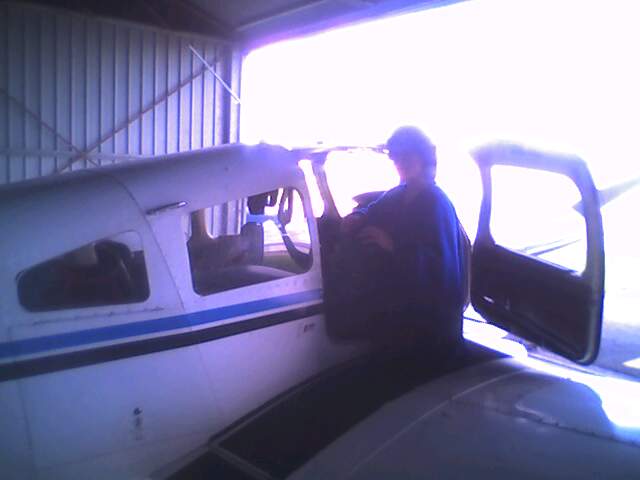 When I got back from the IMS Meeting at Stanford and JSR-286 Expert Group Meeting at Oracle, we had a meeting with Bill Spencer whom I had worked so closely with on the NEESGrid project. Bill had a new project called the Mid-America Earthquake Center (MAE) that he had gotten funded and he wanted to explore the option of bringing some of the NEES team back together. He invited Beth and me down to Urbana-Champaign Illinois along with Greg Peters. Beth is a private pilot and is a 25% owner of a single-engine plane. So we decided that we would fly ourselves from Ann Arbor, MI to Urbana-Champaign, IL. I also had a pilot’s license but had not flown in a small plane in many years so this sounded like a great idea. Beth even said she would let me take the controls for a while to let me see if “I still had it”.

One the way down, I sat in the back seat. I had my laptop, cell phone, and my battery-powered GPS and did some coding on the flight down. I figuredBeth did not need me looking over her shoulder and right-seat-driving. I would get to fly in the right seat on the way back. Greg was a little queasy about flying a small plane so I figured he could sit up front on the first leg of the trip.

As I watched Beth fly the plane it was obvious that she and I had completely different approaches to flying. I always approached flying as if I were a commercial pilot (in a tiny plane) and worked to be completely precise at all times in terms of navigation and attention to detail. Beth on the other hand flew with emotion. She should have been a barnstormer in a bi-plane or at least have an open cockpit with a white scarf, leather jacket, and goggles. She flew with so much joy whereas I flew with my brown leather jacket and Ray Ban sunglasses and clipboard, trying to look oh-so-commercial-pilot in my tiny single-engine plane.

Ironically, in terms of approach to programming, our personalities were the opposite. As a programmer, I was the creative fearless barnstormer with the white scarf and goggles and Beth was the precise, logical professional programmer with her Ray Ban sunglasses and clipboard.

It was fun to watch Beth fly – it was as if she was playing with the clouds. She did not spend much time looking at the map, nor was she obsessed with the nagivation radios. Most of the time she was looking outside the plane at the absolutely beautiful day with blue skies and widely scattered clouds over a pretty patchwork of farmland. While I was watching Beth fly out of the corner of my eye and, coding with my laptop on my lap, I was also quietly watching my GPS. Back when I had been flying small planes, GPS units were not so common so I wanted to see how they worked on a plane. Beth was not a fan of GPS units – I think they got in the way of her creativity and enjoyment as a pilot.

But as we were approaching where Beth thought we should be seeing Urbana-Champaign, my GPS indicated we were lost. We were 35 miles East of where Beth thought she was. We had plenty of fuel and it was an absolutely gorgeous day and I was just enjoying being in the air so I figured I would wait and see how long it would take Beth to figure out she was lost. She was confused because where she had ended up, there was a city and she knew that at Urbana-Champaign the airport was a few miles South West of the city, so she wandered South West of the wrong city for a while looking for the airport that she would not find. With my GPS and peering at the map over her shoulder, I knew that we were flying over Danville, IL and not Urbana-Champaign.

At some point it dawned on Beth that the airport was not where she expected it to be and the city was more of a town and way too small to be Urbana-Champaign. As she was discussing her thoughts about being a little confused with Greg, I just quietly mentioned that I wondered if we might be over Danville instead of Urbana-Champaign. Beth quickly took a look at the map and everything she was seeing quickly confirmed that we were indeed over Danville so she headed west following I-74 and quickly found Urbana-Champaign and the airport. I waited until we landed to tell her that I had cheated and used my GPS.

The meeting with Bill went well. Unfortunately, I was so deeply involved in Sakai that I really could not help him in his new project. Beth was also pretty busy at the time as well so we really decided that Greg would would be the primary MAE contact on the work and Beth and I would act as consultants to the effort.

On the way back it was my turn to sit up front with Beth in the right seat. True to her word, Beth let me fly for a half hour or so after we got to altitude. I was surprised at how rusty I had become after fifteen years of not flying. But after a while the ability to hold a heading and altitude started to come back. It felt great to be flying again. After a half-hour, I gave the controls back to Beth and just enjoyed the rest of the flight home with Beth at the controls.