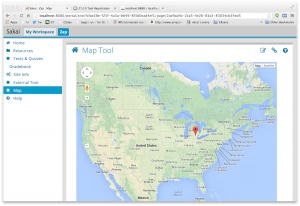 You have been hearing a bunch about the new responsive Morpheus portal and the removal of the iFrames from Sakai 11. Lots of work has been going on. Last night I committed the first of many changes to the portal code in trunk to start Sakai 11 down the path to being iframe free. The Morpheus effort is already well on the way to making our default portal mobile friendly and responsive.

If you go to the nightly server as of this morning, you will see that there are no more iframes except for the following tools:

Make an account, make a site, add the Gradebook and a few other tools to the site – then click the four buttons across the top of Gradebook and then click the Back button four times – watching the URL change. No iframes, real REST looking URLs in the location box and flawless back button.

At this point we have not done anything that is irreversible, all we did was change two property defaults in trunk. You can restore yesterday’s behavior by setting these back to their old defaults:

If you are playing with the morpheus portal, the next time you so an ‘svn update’ the same settings and behaviors will be in effect. The morpheus portal is inlining all but the above tools as well.

None of this will be put into Sakai 10 – it will remain in trunk for Sakai 11. We know there will be lots of little issues as we completely rewrite how the portl works underneath our feet and so we really need the next six or so months to colletively test these major UI improvements.

Over the next few weeks, we will be working on tweaking little markup glitches to make it so all tools can be inlined in both the neo and morpheus portals. Lessons, Samigo and Preferences have small issues of markup conflicts, jQuery versions or local CSS bits that should be easily fixed to allow them to be inlined. DropBox and Home use Bootstrap Javascript and CSS and so they have significant markup conflicts between them and the portal – we may need to wait for morpheus to mature some more to get these two tools working in inline mode. Home has four tools on a single page and there is no way to inline more than one tool on a page other than using portlets so the Home page will take some work – or perhaps we just replace it with the Dashboard :).

As we make these changes, every effort will be made to keep the tools working in all variants of the portal (neo with frames, neo with no frames, and morpheus with and without frames). But at some point we will need to change tool markup in a way that it no longer works with the neo portal or works in a diminished mode in neo. By that point, morpheus will have nmatured to the point where it will be the default and only portal that we support for Sakai 11. When that happens there will be plently of communication and announcements and opportunities to do some testing and feedback from the community. So make sure to listen carefully to the developer and user lists in Sakai over the next few months as this bit of “evolution in place” happens.

You can track what is happening at this JIRA:

If you find a problem that appears to be a markup conflict between the portal and tool markup, please file a JIRA and link it to SAK-27774 and we will see what we can do.

Let us know what you think of this on the user and developer lists. One of the benefits of being part of the Sakai community is that we make changes like this in the open and invite broad disucssion about them. It is one of the hallmarks of an open community of developers and users guiding a product forward together.

This is the first of many steps to a state-of-the-art responsive and iframe-free user experience – the journey of a thousand commits starts with a single commit.